Kudos to whoever did this post  http://sowhatsnews.wordpress.com/2013/05/14/philippines-named-most-stupid-country-to-elect-a-20-year-ojt-as-a-senator-by-time-magazine/ I just hope you received the pingback. You are so brave that you forgot to put your name on the article. The article is probably viewed more than any other article in your page I suppose because you’ve used big names like ‘Time Magazine’ and the newly elected senator Nancy Binay(when people read this, she might have been proclaimed already).

Let’s take a look at your so called cover photo of Time Magazine. 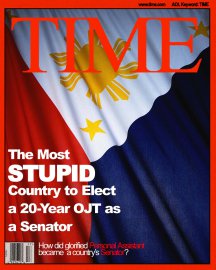 Nice image you have here. Makes it a little more legit. I was dumbfounded when I saw this but I can’t believe Time would ever create such stupid headline. So stupid that the people would want to know who their editors are and who published the article. And it is very unbelievable that it went out immediately the day after elections.

I was considering it a good story but you forgot to create a legit background story. Like hacking on Time’s website putting your hoax image and putting a similar article in their website. That would really be credible.  Else It’s all just a made up story. And it is.

I did my assignment and checked on Time’s website which is more legitimate than your SATIRIC WEBSITE.

This is what I saw. And reading through your article[whoever you are who wrote and publish it] breaks my heart because I know you are a Filipino and you are not impressed by the results of the 2013 Elections but so am I. And so with a lot of people but the only difference is you put up some hoax article dragging famous publishers and that dampens the dignity of Filipino netizens.

Just to be sure before I try to publish this I need to look further. 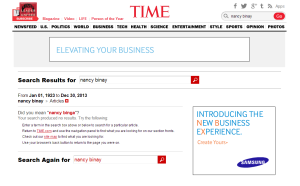 If you want to personally check on Time Magazines Website you can go to: http://www.time.com/time/magazine

You will see the homepage then you can click on search and just type in Nancy Binay. You’ll see what you need to see 🙂

Although I could understand that your website is called SWN — So, What’s News? is a SATIRICAL & FICTIONAL news website. Our aim is to inject humor into everyday news to provide respite to readers who have grown weary with mainstream news organization’s partisan, biased and depressing way of presenting the news.

Bloggers are soooooo creative here. So creative that they put their brethren to shame and make people believe. Seriously. Congratulations.

I did not vote for Nancy Binay but if ever she is elected [and I guess she is]then I respect  the million voices of my country. If people I don’t like enters, then I can’t do anything but to support and move forward. It’s the way of life and it should be the only way.

You call my brothers and sisters in this country stupid. Then I guess you don’t beg to differ. Or maybe you do. I don’t care anyway.

What do you do to your fellow? Do you teach them not to be stupid? Well, I guess not cause you won’t be blogging about that.

Progress is a two way street. The government acts and so should the people. So when something goes terribly wrong in our country it is not just the fault of whoever is in position. Everyone is held responsible for whatever is happening. And as for me, I don’t want to redeem myself by looking on the depth of corruption of other people. Corruption can be anything. You corrupt other people’s time, money, skills, etc for your own personal gain. I admit, that sometimes or maybe a lot of times when I was still studying that I corrupt my parents by saying we have to pay extra fees in school because I know my allowance is not enough for my extra curricular activities.

My point is, we all should work it out. Give everyone the benefit of the doubt because you yourself don’t wanna be judged with just this article [for which I think I may have already and I am sorry for that]. If you want to blame someone then blame yourself for not doing your best in educating your fellow. Blame the literates because we haven’t done well our part but don’t call your brethren stupid. They were that because they have no choice. Not all of them are given the privilege to take it all in.

So before I end this article, I would like to clear that Time Magazine never published that cover photo nor it has even an article about it. Everyone deserves the Benefit of the Doubt and so is Nancy Binay. So is the people we didn’t vote that got in the senate. I don’t believe that the Filipinos are stupid. It’s just that, not all are given the privilege to understand everything. For the success of the 2016 Presidential Elections, I urge those who are literate to educate as much as we can to our fellow.

There is hope. Have faith. I am a proud Filipino.

P.S. Sharing an article is very easy these days but please before you click share please verify. You don’t want people to take in false information. It’s a shame.